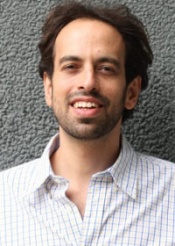 Jacques Fux was born in the city of Belo Horizonte, Brazil, in 1977. He received the 2013 São Paulo Prize for Literatura (considered The Man Booker Prize of Brazil) for his first novel, Antiterapias. He received degrees in mathematics and computer science and later earned two doctorates, one in comparative literature from UFMG and another in French language, literature, and civilization from Université de Lille. He published Literatura e Matemática: Jorge Luis Borges, Georges Perec e o OULIPO in 2016 (Perspectiva), which  was recognized as the best dissertation in letters in Brazil, and he was one of four finalists for Prêmio APCA. From 2012 to 2014 he was a visiting scholar at Harvard University. He also published Brochadas: confissões sexuais de um jovem escritor (Rocco, 2015),  Meshugá: um romance sobre a loucura (José Olympio, 2016), and Nobel (José Olympio, 2018). Antitherapies will be published in Israel, Mexico, and Peru in 2019.

Eric M. B. Becker is an award-winning literary translator and journalist, and editor of Words without Borders. In 2014, he earned a PEN/Heim Translation Fund Grant for his translation of a collection of short stories from the Portuguese by Neustadt Prize for International Literature winner Mia Couto, forthcoming from Biblioasis. He was resident writer at the Louis Armstrong House Museum in 2014.  Becker was recently awarded a 2016 Fulbright grant to translate Brazilian literature. Before assuming the editorship of Words without Borders, he was assistant managing editor at world literature journal Asymptote when it earned a London Book Fair International Excellence Award.