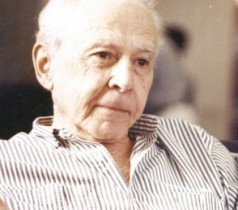 José J. Veiga (1915-1999) was born in Corumbá, in the state of Goiás. After doing a law degree in Rio de Janeiro, he worked as a journalist for, among others, the BBC and O Globo. His first novel Os cavalinhos de Platiplano (Little horses of Platiplano) was not published until he was forty-four years old, and much of his best work, such as his novel Sombras de reis barbudos (Shadows of bearded kings) appeared in the ’70s and ’80s. A close friend of Guimaraēs Rosa, his work has elements of what came to be known as Magic Realism, and two books of his appeared in English in the 1970s, though both are long out of print.

Rahul Bery is based in Cardiff, and translates from Spanish and Portuguese into English. His translations of authors such as Álvaro Enrigue, Daniel Galera, Guadalupe Nettel, and Enrique Vila-Matas have appeared in Granta, The White Review, Art Agenda, Freeman’s, and others. His sample translation of Ricard Ruiz Garzón’s La Inmortal made the shortlist for the 2018 edition of Booktrust’s In Other Words. Rahul is currently the British Library’s translator in residence.